For the 22nd Sketchcrawl, the Barcelona Group ( Eclecticbox, Lapin, Monica and I ) met at the Christopher Columbus monument which is located at the end of Las Ramblas. The statue points out towards the port, while to his back the Tibidabo mountain traces out an interesting silhouette behind the city (thanks in part to the church that's situated right on top). After we had made our introductions we started sketching. We had only being drawing around 15 mins when it started to rain!! 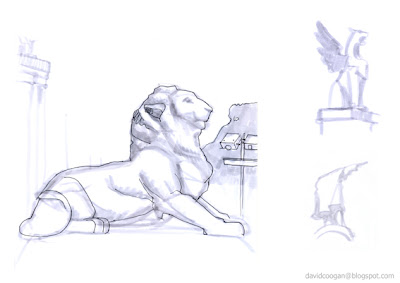 Lapin had the great idea of going to the nearby World Trade Centre which gives a good view of the city and the port. 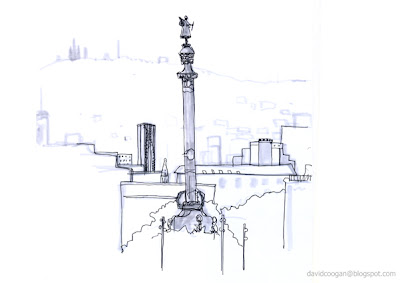 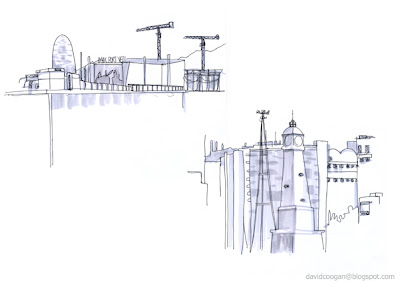 ( this is looking back at the Columbus monument, one towards the IMAX cinema with the Torre Agbar in the background and another of the port).
When the rain stopped we made our way back to the Christopher Columbus monument. 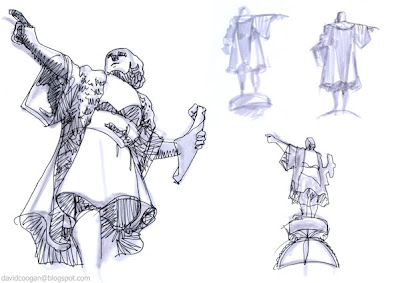 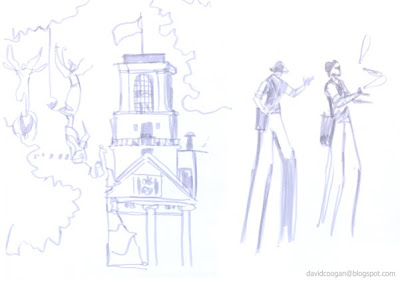 ( I tried to do some different views looking up at the statue but my neck wasn't too happy about that idea so I started drawing some clowns on stilts instead, that were entertaining people sitting outside a bar.)
Although the sun was out it was quite chilly with a breeze coming from the port. Monica already had a cold so she decided to call it a day. After a while, the rest of us went for something to eat and had a chat about drawing. 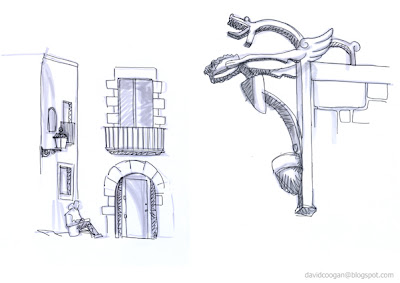 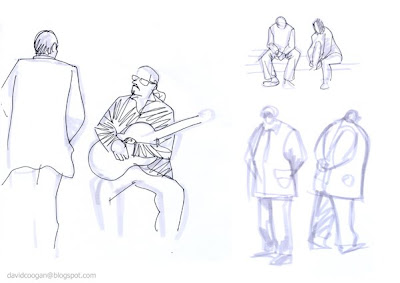 Stomachs filled with pasta, we crawled our way through the Barrio Gothico, stopping at the Plaza del Rey. While drawing, we could hear a guitarist playing commercial pop songs in the classical Spanish guitar style!!
( Eclecticbox sitting in the only corner that had some sunshine, an old rusted iron torch holder, some various sketches of people)
It was getting a bit cold by this time so Lapin had the idea of going for a coffee on the top floor of El Corte Ingles. The view of the city is amazing from there. I had never been before, so twice in one day I got to see the city from new viewpoints (thanks Lapin! 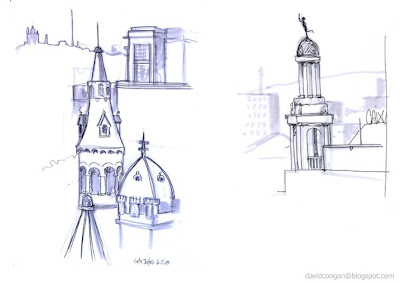 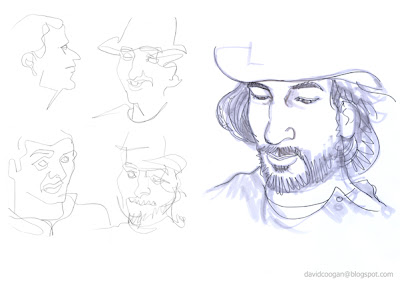 Just after 6pm, it seemed like time to stop sketching. We decided to do portraits of each other, it was a bit like a gunfight in a western, sitting in silence with only the eyes moving. To finish off the day, Lapin had the idea to do some blind drawings of each other (drawing without looking at the paper).
(two blind drawings of Eclecticbox, two of Lapin and what was supposed to be a portrait of Lapin).

It was a great day in great company!
Posted by Dave at 10:50 AM
Labels: Sketch Crawl

Excellent! What a great day...sounds fun! ;)

Hi Kaz! Thanks for the comment. Would be cool if you could come along for the next one. The more the merrier!