A great turn up on Saturday (60 people!). It was a nice and sunny too. A big thanks to Eclecticbox once again for coordinating the day (and to Lapin for the super map with timetable included). 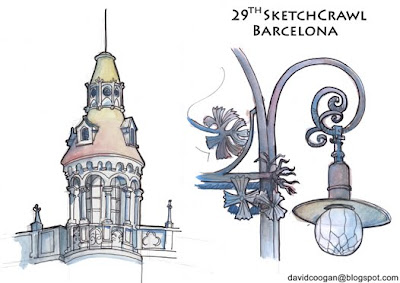 These first ones are from Passeig de Gràcia, the starting point for the Crawl. The first one is of the building Cases Rocamora (it's on the corner of Carrer Casp with Passeig de Gràcia). The other is a detail of one of the many lamps (dating from 1903)
that decorate Passeig de Gracia, by Pere Falqués i Urpí. 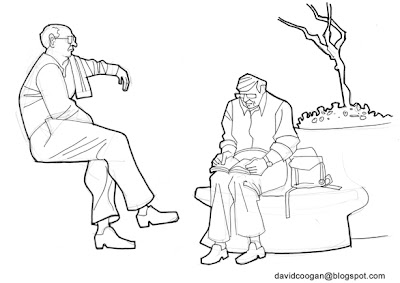 Some people taking the weight off their feet, Passeig de Gracia. 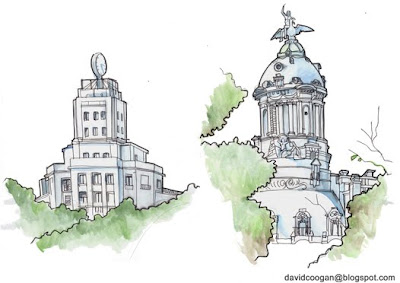 The second sketch is of the building "La Uníon y el Fénix Español" (1927-1932) by Eusebi Bona i Puig, located on Passeig de Gracia. The first drawing is a view from Plaza de Catalunya, where I went while the main group went to the restaurant. 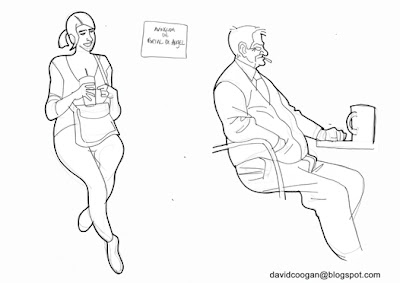 After a quick sketch of this girl,in Portal del Angel, it was time to meet up at La Boquería. No one else had turned up yet, and as the entrance to the market was hectic, I continued on sketching around Las Ramblas. This is the one area of the city where you'll find people drinking from enormous beer glasses! 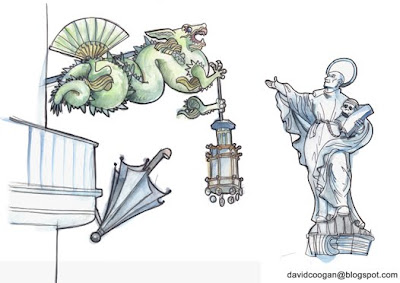 The first sketch is of the building Casa Bruno Cuadros (also known as Casa dels Paraigües- House of the Umbrellas). Built in 1858, the present day facade was remodelled in 1883, by Josep Vilaseca Casanovas (who also designed Barcelona's Arco de Trionfo). The bottom floor of the building once housed an umbrella shop, hence all the oriental umbrella motifs outside. The second sketch is of a statue outside the 17Th century church, Igelsia de Betlém, Carrer del Carmen.
Posted by Dave at 1:54 AM

Beautiful drawings! I love the dragon, lamp and all that ornamentation of the buildings.

Gracias a todos por tus comentarios! Thanks everyone for the comments!