Well, October 2nd means my nephew is now one year old. Happy Birthday to him and congratulations to my sister and her husband. It was great to see them when they came over to visit Barcelona during the summer.

It also marks one year of the Sketch blog. It also coincided with the preview of the movie "Cher Ami"( previously titled Flying Heroes ) during the film festival in Sitges. A lot of faces I hadn't seen in awhile eager to see the results of almost four years work!

So with the usual delay, here's some sketches which should have been posted in September. 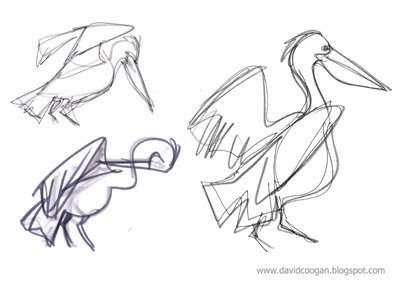 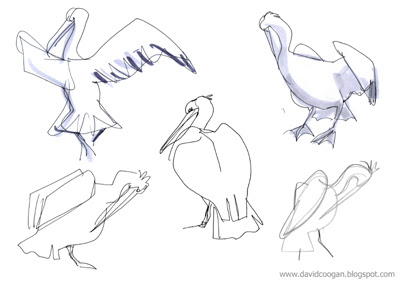 Can't go to the Zoo without paying a visit to these guys, they're real fun to watch. 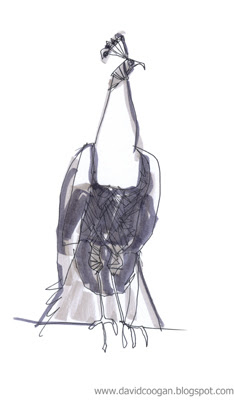 Barcelona Zoo is full of Peacocks walking around freely. They're so use to people, they usually come up close begging for food ( so if a male sneaks up behind ya while drawing and belts out his cry it's enough to scare the pants of you). 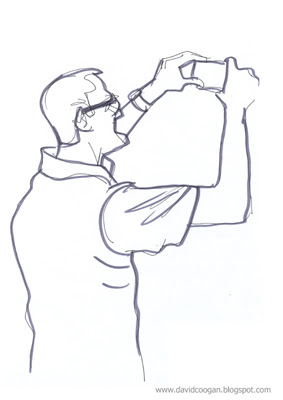 This isn't a great drawing but it made me think about keeping poses modern- I think if I had 've made a pose of someone taking a picture I still would've made them look through the viewfinder!! Ouch!! Nowadays it's all cameras up in the air (although once or twice I have forgotten and held the digital camera up to my eye instead of looking at the LCD screen). 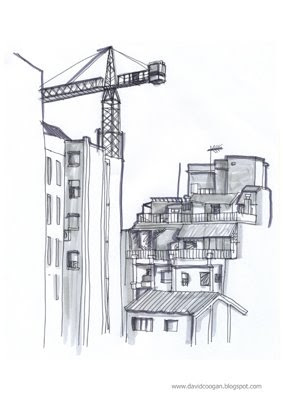 Don't particularly like this one (thinks it because I lost concentration half way through and forced myself to finish it ) but as I don't have any other building drawing....
Posted by Dave at 9:51 AM
Labels: September Sketches

beautiful sketches. If I'd be in Barcelona, I'd come to SketchCrawl... Is it good weather there? I wish I could afford to go somewhere.

Hi
tomorrow 25 october world wide sketchcrawl,Don't forget to join alone or with friends and don't deprive us of some of your drawings!
un saludo

Hi JoonasJoonas! thanks for stopping by and checking out my blog. It's actually very cloudy here this week , looks like we could have rain for tomorrows sketchcrawl :(

Hi Bibi, thanks again for the reminder. Hopefully tomorrow I'll have some company and bit by bit can get get a group going for furture sketchcrawls. It's always more fun sketching with other people.
un saludo!